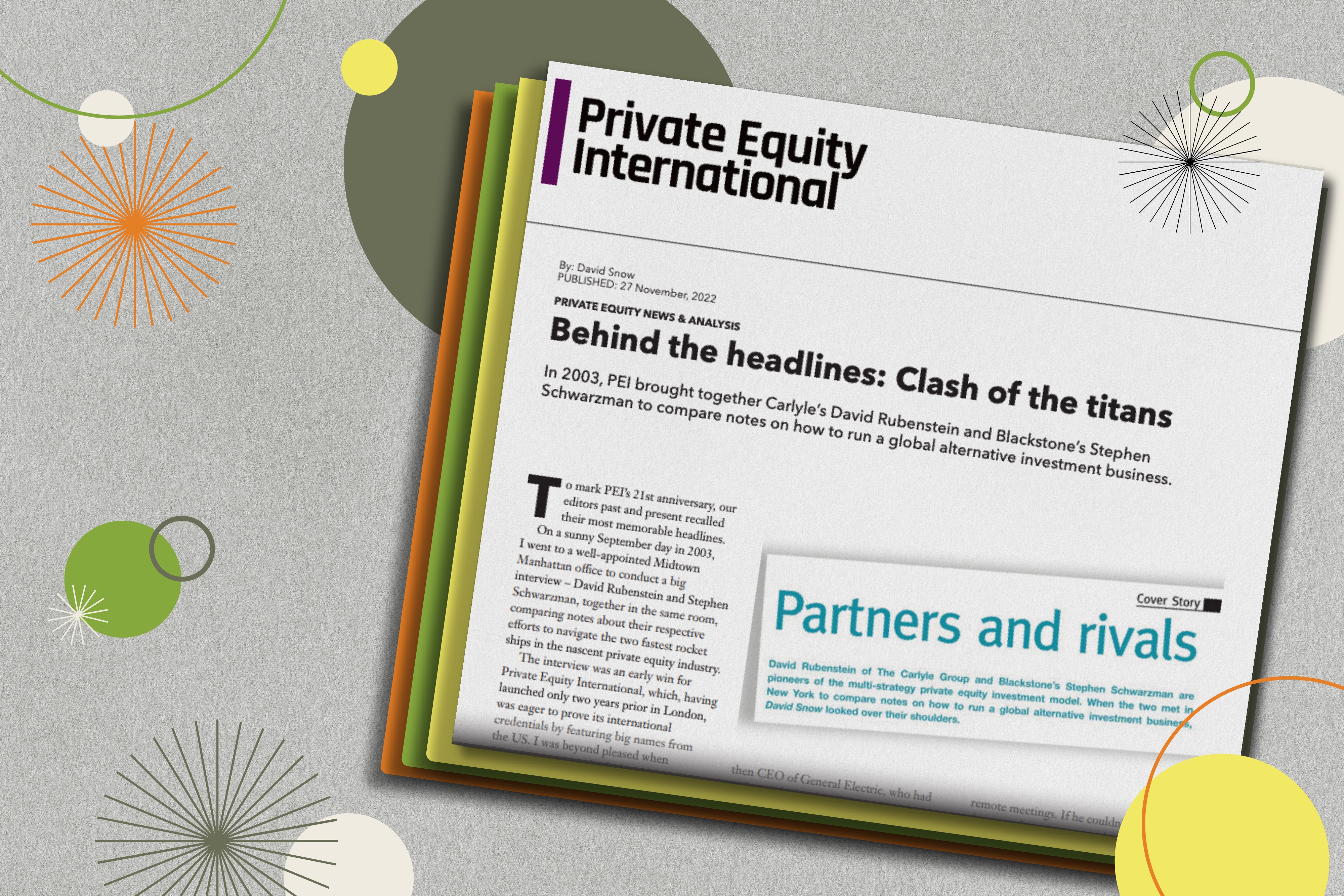 Behind the Headlines: Clash of the Titans

In 2003, PEI brought together Carlyle’s David Rubenstein and Blackstone’s Stephen Schwarzman to compare notes on how to run a global alternative investment business.

To mark PEI’s 21st anniversary, our editors past and present recalled their most memorable headlines. On a sunny September day in 2003, I went to a well-appointed Midtown Manhattan office to conduct a big interview – David Rubenstein and Stephen Schwarzman, together in the same room, comparing notes about their respective efforts to navigate the two fastest rocket ships in the nascent private equity industry. The interview was an early win for Private Equity International, which, having launched only two years prior in London, was eager to prove its international credentials by featuring big names from the US. I was beyond pleased when PR representatives for Rubenstein and Schwarzman agreed to the super-summit. Like many disruptive industries, private equity had started out in obscurity, with a series of innovative transactions in the1970s and 1980s. But these were dismissed by many to be one-off financial novelties fashioned by corporate debt.

By the early2000s, however, it had become clear that private equity was a business model that was repeatable and scalable, and among the biggest scalers were the heads of Carlyle and Blackstone. The two were chatty with one another and confirmed that they frequently crossed paths on the LP fundraising trail and in the mega-deal arena. In fact, the two had seen each other just two nights earlier at a dinner organised by Jeffrey Immelt, then CEO of General Electric, who had gathered the heads of many private equity firms together to figure out what these entities were, exactly, that were now doing so much business with GE. Immelt was intrigued to learn that the leading private equity firms had become “relatively giant industrial complexes”, said Schwarzman.

In 2003, Blackstone, co-founded and led by Schwarzman, had $25 billion in assets under management, and Carlyle, co-founded by Rubenstein, managed $16.4 billion. While Blackstone was larger, Carlyle was more global, with offices across the US, Europe and Asia.

Up until September 2003, Blackstone had only two offices – in New York and London. This was largely because, at the time, Schwarzman had not been satisfied with the video technology to support remote meetings. If he couldn’t clearly see the eyes of a counter party, he explained, he didn’t want to do any business with them. Advancements in the technology had contributed to the firm’s decision to establish a third office, which opened in Hamburg that month. “I know that sounds silly,” said Schwarzman, “but it was extremely important to us.”

Rubenstein also observed that one particular technology was going to make it easier to run a global firm: e-mail. Before the advent of e-mail, which Rubenstein admitted he was just learning to master, it was “difficult to see” how a manager in Washington, DC might communicate effectively with an investor in Hong Kong.

No doubt e-mail and video conferencing accelerated the expansions of both firms in the intervening 20 years. More importantly, the early successes of firms like Blackstone and Carlyle convinced many large investors around the world to open up their portfolios to alternative investment vehicles of all types, with many of these bearing the brands of Blackstone and Carlyle.

Over the same period, GE’s market cap has shrunk by more than two-thirds, showing how entirely possible it is for a legacy industrial complex to be outpaced and outshone by a group of surprisingly ambidextrous and ambitious dinner guests.

David Snow is co-founder and editorial director of Privcap, a video and creative-communications agency for businesses. He was editor-in-chief at PEI Group until 2010.

212.287.4256
sales@privcap.com
Thank you! Your submission has been received!
Oops! Something went wrong while submitting the form.